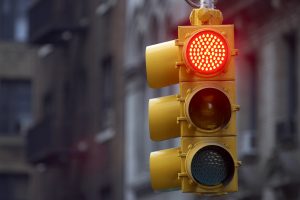 Running a red light is more dangerous than you might believe, and it is a frighteningly common practice. According to the Insurance Institute for Highway Safety (IIHS), 811 people were killed in 2016 in collisions involving red light running. The best way to avoid these accidents is to stop running red lights now. But, even if you never run a red light yourself, you need to take precautions to protect yourself from those who do.

Protecting Yourself from Red Light Accidents

Even though you aren’t running red light, you have to be on the lookout for those who are, both intentionally and unintentionally.

When someone runs a red light, it can result in a T-bone collision, far more likely to cause serious injuries or death because occupants don’t have the protection of the engine compartment or the rear of the vehicle and take the brunt of the force from the impact. But you also have to look out for the daredevils ahead of you who throw on their brakes at the last second when they realize they can’t beat the light, and you want to make sure you’re not one of them either.

A few ways to reduce your risk of getting hit by red light runners include:

If you have been injured by a driver who ran a red light, the person who hit you can be held liable for their negligence, but you will still need to prove that they were in the wrong. Call the Law Office of J. Clay McCaslin at 503-239-1910 or email us today and schedule your free initial consultation.